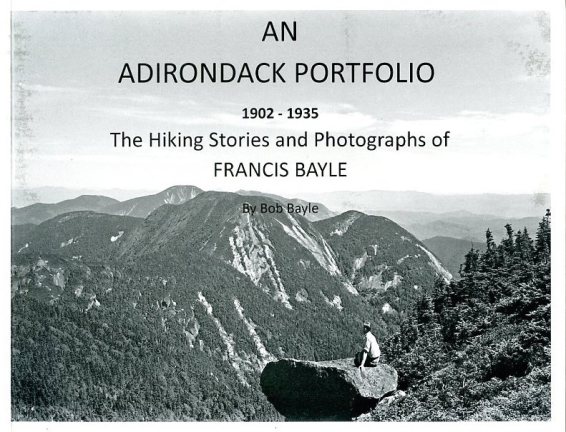 This book contains many photographs taken by Francis Bayle between 1911 and 1935 on his hiking trips into the Adirondack Mountains. Throughout his life Francis maintained a great love of and appreciation for this mountainous section of New York State. The hiking stories highlight Francis thoughts about and impressions of the Adirondack region. The pictures offer a vivid reflection of the wild and unspoiled landscapes of the Adirondacks in the first third of the twentieth century. 290 pages, 230 photos. Published in 2016. $32.95 plus sales tax.

Contact me to purchase. New York State sales tax (7%), shipping ($6.80 per book) and handling will be added to each order. I can mail these books anywhere within the continental United States by USPS.

This book can also be purchased in the following locations: 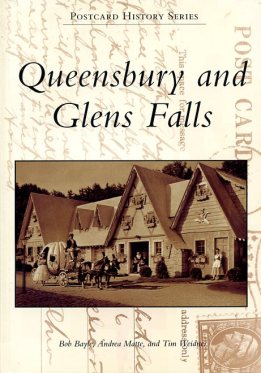 In 1762, Abraham Wing led a group of Quakers to lands he had acquired on the edge of the Adirondacks. Soon, a cluster of log cabins surrounded the mills that Wing had built at the falls on the Hudson River. By the early 19th century, Queensbury consisted of several small hamlets and the village of Glens Falls, which grew into an industrial and commercial center.

Factories produced lumber, lime, paper, shirts, and cement and Glens Falls featured many stores, churches, theaters and a hospital. The surrounding township remained largely agricultural but offered such recreational activities as golf, swimming, fishing, boating and skiing. After World War II, commercial momentum shifted to Queensbury as motels, tourist attractions and shopping centers sprang up along Route 9, the main route to Lake George and the Adirondacks.

This book features postcard images of many of the area’s establishments. $21.99 plus sales tax. 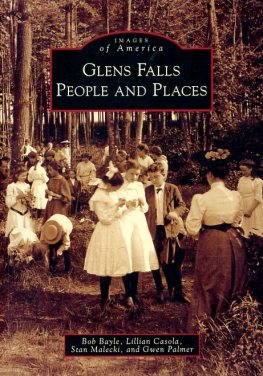 The name Glens Falls went through a series of changes, beginning simply as “the Corners”, after a bend in the road from a major military installation in Fort Edward. In the 1700’s, it was known as Wing’s Falls, and later Pearlville, Pearl Village and Glenn’s Falls; but by the middle of the 1800’s, it was determined to be Glens Falls, one of the wealthiest villages in the state. It was the people who settled in the town that helped to shape it. The lumber barons provided the financial backing to begin banking and insurance institutions and served as officers of every major business and governmental agency in town. Glens Falls People and Places covers the lives of the prosperous and preposterous people and their contributions to the city’s development through the 20th century. $21.99 plus sales tax.

Glens Falls presents a photographic essay of the history of a community on the Hudson River, midway between Saratoga Springs and Lake George. The book spans the years from 1860 to 1925, when Glens Falls was reaching its peak in economic, social, political and cultural growth. Depicted in stunning images are the city’s simple beginnings, the days of dirt roads traveled by horse and buggy, and its cultural emergence with opera houses, exquisite mansions, and public transportation. Clearly portrayed are the educational, religious, business and recreational opportunities of the time. $19.99 plus sales tax.